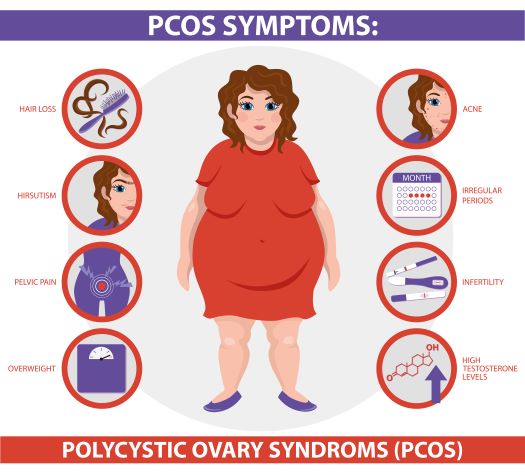 Polycystic ovary syndrome is a complex disorder affecting women during their reproductive years. Even if you don’t want to have a child, you should learn if you have PCOS or not, as its long-term effects are significant.

Symptoms of PCOS include:

PCOS is a condition that affects around 10 percent of women, so here we’re debunking the six biggest misconceptions about it:

The exact cause of PCOS is unknown, but one certain thing is that it’s not your fault. Genetics, among other factors, is widely believed to play a part in PCOS.

Androgen is a male hormone that can trigger PCOS when they’re developed in the body in an excessive amount. PCOS causes women to produce more androgens than normal, which can interfere with ovulation and cause irregular menstrual cycles.

Another hormone – insulin – may play a role in the body’s increased androgen production. Insulin resistance is common in women with PCOS. Women with type-2 diabetes are obese or overweight, have unhealthy eating habits, or have a family history of the disease.

There’s no cure for PCOS, but adopting a healthier lifestyle and seeking treatment with a lady doctor can help balance hormones and reduce PCOS symptoms.

PCOS is a very common condition in women. PCOS is a condition that affects around 10 percent of women, and it usually develops during late adolescence or early adulthood.

PCOS can indeed hinder the chances of you being able to conceive. But this isn’t true for everyone. If you’re living with PCOS and are trying to get pregnant, you should consult with your lady doctor to see your chances of pregnancy and treatment options that can help you conceive.

While it’s true that many women who experience PCOS are obese or overweight and that obesity worsens PCOS symptoms, it isn’t true that PCOS only affects overweight women.

The correlation between PCOS and weight gain has to do with the body’s inability to use insulin effectively, leading to weight gain. That’s why adopting a healthy lifestyle of eating clean and regular workouts can aid you in living a better life.

If you live with PCOS and don’t want to get pregnant, PCOS can still affect your life in various ways. PCOS is associated with a higher risk of diabetes, cardiovascular disease, high blood pressure, high cholesterol, endometrial cancer, and high blood cholesterol.

Whether you’re trying to conceive or not, PCOS is a serious condition to live with and can have long-term health effects. So, you should consult with your lady doctor.

Is Alcohol Intake Are Dangerous To the User’s Body?

Group Health Insurance Plan – All You Need to Know